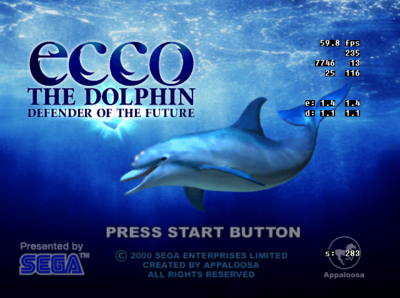 Discuss this on the boards here.

It’s that time of the week again. This week we have a few goodies for fans of the first Ecco the Dolphin for the Dreamcast! This week we’re releasing all of our available Ecco the Dolphin: Defender of the Future prototypes that exist on GD-Rs in the efforts to preserve what we have before all of it is lost forever! The lot came with two interesting curiosities besides the few prototypes of this game. 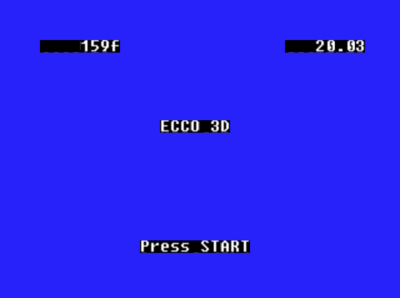 The first of which is an extremely early prototype of the game before it was given it’s proper title. This game is called “Ecco 3D”. It’s similar to the E3 auto demo that was released by BANANABREAK a few years ago, but this one is more of a playable tech demo of the game.

The second is a possible unreleased second American revision that was created about a month after the initial release build. This revision is most likely a precursor to the Japanese revision, which might’ve came later that year. The differences between this revision and the final released revision are unknown.

Ecco the Dolphin (Jun 29, 1993 build) is a unreleased second revision to the first Ecco the Dolphin which originated from the Sega ROM Archive. This was released in part by Epicenter and I a few years ago, but this is the first time the ROM has been released formally on my site. Ecco: The Tides of Time (Early prototype) is an extremely early prototype of the sequel for the Mega Drive that was released by a group based in France called Paradox. Ecco: The Tides of Time (Apr 13, 1994 prototype) and Ecco: The Tides of Time (Apr 29, 1994 prototype) are prototypes that also originated from my Sega ROM Archive as part of the QA BBS backups that I released with Epicenter a few years ago. Ecco the Dolphin 32x (CinePak Demo) is a well-known tech demo that was featured at CES in 1995 that’s nothing more or less than a tech demo of the CinePak video format running on the Sega 32x. Ecco 3D (E3 Demo) is the most recent non-Hidden Palace release that was discovered by the group BANANABREAK, and appears to be a much more extended version of my Ecco 3D prototype but as a non-playable auto demo. Finally, Ecco the Dolphin: Defender of the Future (Apr 8, 2000 prototype) is a relatively old release by Caverns of Hope that contains a fair amount of differences in comparison to the final release.

That’s all the Ecco stuff for this week! Stay tuned for next week for more…

Since relaunching the website, we’ve had a number of user submissions for other prototypes! The latest submissions can now be found on the front page under our news archive. But as a recap, here are the prototypes that have been added thanks to our users.

We’ve also started some work on categorizing the releases by lot. Some of our releases so far can now be part of a lot, rather than just part of a system or genre. Check it out here! We currently have a page specifically for Ecco month which you can check out here. As you might have noticed, there’s one lot in the list that we haven’t acknowledged so far that is currently in the process of being put together called the Climax lot. More information about the lot itself will appear in it’s own announcement in the future, but for now, you can take a look at some of the developments other users are doing in efforts to preserve the lot. I’m making some contributions as well, so stay tuned!

Special thanks to Billscat-socks, Prototector, and Borman for their contributions this week!

That about wraps up the events for this week. As always, tune in once in awhile for more goodies for Ecco (there’s a ton left, so stick around)!